“Authorizing the Secretary of War to Prescribe Military Areas

Now, therefore, by virtue of the authority vested in me as President of the United States, and Commander in Chief of the Army and Navy, I hereby authorize and direct the Secretary of War, and the Military Commanders whom he may from time to time designate, whenever he or any designated Commander deems such action necessary or desirable, to prescribe military areas in such places and of such extent as he or the appropriate Military Commander may determine, from which any or all persons may be excluded, and with respect to which, the right of any person to enter, remain in, or leave shall be subject to whatever restrictions the Secretary of War or the appropriate Military Commander may impose in his discretion. The Secretary of War is hereby authorized to provide for residents of any such area who are excluded therefrom, such transportation, food, shelter, and other accommodations as may be necessary, in the judgment of the Secretary of War or the said Military Commander, and until other arrangements are made, to accomplish the purpose of this order. The designation of military areas in any region or locality shall supersede designations of prohibited and restricted areas by the Attorney General under the Proclamations of December 7 and 8, 1941, and shall supersede the responsibility and authority of the Attorney General under the said Proclamations in respect of such prohibited and restricted areas.

I hereby further authorize and direct the Secretary of War and the said Military Commanders to take such other steps as he or the appropriate Military Commander may deem advisable to enforce compliance with the restrictions applicable to each Military area here in above authorized to be designated, including the use of Federal troops and other Federal Agencies, with authority to accept assistance of state and local agencies.

I hereby further authorize and direct all Executive Departments, independent establishments and other Federal Agencies, to assist the Secretary of War or the said Military Commanders in carrying out this Executive Order, including the furnishing of medical aid, hospitalization, food, clothing, transportation, use of land, shelter, and other supplies, equipment, utilities, facilities, and services.

This order shall not be construed as modifying or limiting in any way the authority heretofore granted under Executive Order (EO) No. 8972, dated December 12, 1941, nor shall it be construed as limiting or modifying the duty and responsibility of the Federal Bureau of Investigation, with respect to the investigation of alleged acts of sabotage or the duty and responsibility of the Attorney General and the Department of Justice under the Proclamations of December 7 and 8, 1941, prescribing regulations for the conduct and control of alien enemies, except as such duty and responsibility is superseded by the designation of military areas here under.”

It ordered all Japanese American to vacate their places of residence and move en masse into concentration camps setup up to accommodate them.  This occurred in the midst of World War II after the Japanese bombing of Pearl Harbor.  Although the United States was already at war with Nazi Germany, no such mandate was imposed upon the many German-Americans living throughout the country.
This mass evacuation imposed a severe burden on the lives of those citizens who were forced to abandon their homes and properties for the “duration” of the war.

In 1940, Walt and Milly Woodward from Bainbridge purchased the weekly publication, the Bainbridge Review.  Two months before the Japanese attack on Pearl Harbor (December 7, 1941) that precipitated the declaration of war against Japan, they pledged in a front-page editorial to, “strive to speak the truth, unafraid. whether it be on a national interest or something purely local.”
They lived up to this promise to their readership; for, the day following the Japanese attack on Pearl Harbor, they warned that, “There is a danger of a blind, wild hysterical hatred of all persons who can trace ancestry to Japan.  That some of those persons happen to be American citizens…easily could be swept away by mob hysteria.”  They attempted to raise the awareness of their subscribers to the loyalty of their Japanese-American fellow citizens by stating in their newspaper that, “These Japanese Americans of ours haven’t bombed anybody…They have given every indication of loyalty to this nation.  They have sent…their own sons – six of them – into the United States Army.” 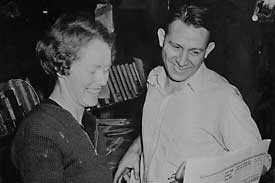 As a result of the EO, 272 Japanese Americans were forced to abandon their homes, properties and friendships and moved to Manzanar – one of the ten Japanese concentrations that were erected throughout the nation.  Manzanar was located at the foot of the Sierra Nevada mountains in California's Owens Valley and ultimately housed 10,000 individuals.
This courageous and tenacious couple continued to speak out throughout the war regarding the injustice of the forced and massive relocation.  As a matter of fact, their publication was the only newspaper throughout the entire country to take such an unpopular position.  The Woodwards actually hired high school students – Paul Ohtaki, Sa Nakata, Tony Koura and Sada Omoto to report from Manzanar on the daily lives and challenges facing the inmates of that camp.
After the war, Walt and Milly Woodward remained strong local activists of the Bainbridge Island community especially in regard to local schools, construction of a new library and public transportation.  Walt ultimately stepped down as editor of the Review in 1963; the newspaper was sold in 1988.  Walt worked for a time on the editorial board of the Seattle times   Milly returned to her career as a high school teacher and died in 1989.  Walt passed away in 2001 at the age ninety-one.
Walt and Milly Woodward were recognized posthumously by the Asian Journalists Association for their outspoken opposition to the involuntary internment of Japanese-Americans. They were recipients of the, Special Recognition Award.

Finally, on March 30, 2009 (the sixty-seventh anniversary of the internment), the ground-breaking ceremony took place to begin construction of the Bainbridge Island Japanese American Exclusion Memorial to honor those Japanese-Americans of Bainbridge Island who were moved into concentration camps.