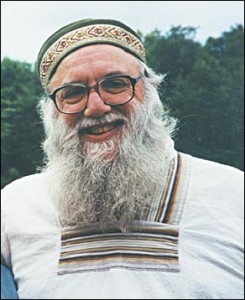 Arthur Waskow is the founder of the highly recognized and acclaimed Shalom Center (https://theshalomcenter.org).  Waskow was born in 1933 and spent his young life in Baltimore, Maryland.  As a young man he got his undergraduate degree at John Hopkins and eventually a doctorate in United States History at the University of Wisconsin at Madison (1963).  At the time of his graduation, the United States was in the midst of social and political turmoil revolving around two distinct issues - the Vietnam War and the Civil Rights Movement.
From 1959 to 1961, in the midst of his academic studies, he was passionately involved in disarmament and civil-rights in the role of a legislative assistant for U.S. Congressman Robert Krastenmeier of Wisconson.  From 1961 to 1963, he was a Senior Fellow of the Peace Research Institute.  This work inspired him to help create the Institute for Policy Studies and acted as a Fellow there until 1977.
Throughout the troubling era of the sixties, Waskow was a vociferous and relentless advocate for world peace and non-violent action against social injustice.  He wrote extensively on these issues including literally hundreds of articles and many books.  In 1968, he was a part of the Washington DC delegation to the Democratic National Convention of 1968.
Waskow’s interests eventually extended to the use of renewable energy and energy conservation – he began to understand the dangers to humanity of the ongoing reality of climate change.  His activism in regards to this issue took the form of his role as a Fellow of the Public Resource Center in Washington D.C.