The children’s massacre at the Robb Elementary school in Uvalde, Texas is yet another example of the long and horrific litany of killings of innocents in this country facilitated and executed with the use of sophisticated weaponry so readily available to anyone. It cannot be ignored that this transpired in a state that proudly proclaims itself to have the most unrestricted environment in regard to gun ownership in the entire country. As a matter of fact the Governor of Texas recently signed into law the ability of individuals to purchase a handgun without any kind of licensing.

One can rationalize this disturbing national trend using the most creative sophistry or accept the view that gun ownership is constitutionally protected even though it is hard to envision that the nation’s founders ever thought that the sparse wording of the Second Amendment to the Constitution would be interpreted in a way that a “well regulated Militia” meant all citizens. No rational government would ever encourage such an idea. One can ignore the remarkable data regarding our standing in the world in regard to gun violence or fail to recognize the unavoidable reality that the scope and deadliness of these events are only made possible by the accessibility of sophisticated and deadly weaponry to all who wish to purchase them. One can refuse to envision the kind of future that will necessarily evolve in an environment in which everyone is armed and fearful and suspicious all the time.

The following illustrations are charts that expose the reality of our standing in the world in this regard. 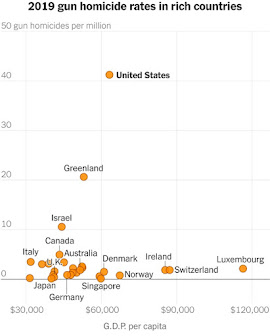 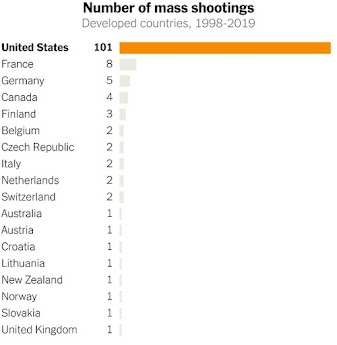 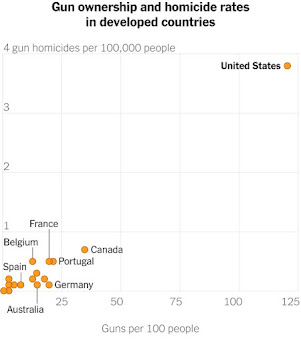 The reality, (as shown above) however, is inescapable – the cumulative impact of these unprovoked and deadly killings of innocent individuals, especially children is having a devastating impact upon the national psyche.   We are, in fact, getting a startling glimpse of the unsustainable future that awaits us as a nation if we choose to ignore this undeniable reality.