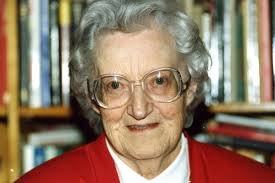 Cicely Mary Strode Saunders, was the founder of the modern conception of hospice and, also established the discipline and rigor associated with palliative care – a type of care with the primary goal of relieving pain and distress in patients with severe and often terminal illnesses. By definition, a hospice is a home for the severely or terminally ill patient.

Cicely Mary Strode Saunders was born in Barnet, Hertfordshire, England in 1918. She was the eldest of three children. Saunders’ family was financially well-situated; however, the household environment was deeply affected by a controlling father and a remote and withdrawn mother. The family lived in in a large house with spacious grounds.

When Saunders was just one years old, she was cared for by her Aunt Daisy. This arrangement was soon abruptly ended and she was subsequently returned to her home and sent to Roedean School when she was 10 years-old. At school, Saunders was taller than the other girls. This difference made her feel awkward and separate from her peers. she felt that this aspect of her growing up made her come to appreciate those who were considered different. As a child Saunders suffered from scoliosis – defined as a sideways curvature of the spine - severe enough that she was made to lie flat on the floor for 40 minutes a day.

These experiences as a child may have contributed to her desire to be of service to others and become a nurse. Her father did not approve of this choice of possible careers. As a result, she went to St. Anne’s College in Oxford where she pursued the study of politics, philosophy, and economics with the goal of eventually working in government.

However, the outbreak of World War II that began when Germany - under the aegis of Adolph Hitler - invaded Poland (1939), disrupted this career path, and, defying her father’s wishes, she enrolled as a student at The Nightingale Training School to become a Red Cross war nurse. During her training, she had rotations at several mental hospitals and worked at the Park Prewett Hospital in London. Physically, the work was very stressful, and placed an additional burden on her back. As a result, she returned to Oxford for a year and gained a "war degree." She was trained at the Royal Cancer Hospital that qualified her as a social worker (almoner), in 1947.

It was in the following year that a life-changing experience altered the course of her professional career. While working at Archway hospital in London, she cared for a Polish émigré, David Tasma, who was dying. In the course of her caregiving, Saunders and Tasma became intensely involved with each other. In their conversations, the idea occurred to them of founding a home in which people who were dying could find some solace and peace in their final days. On his death, he left her 500 pounds as seed money to realize this dream.

Saunders was advised by professional colleagues that if she truly wished to realize her dream, she should obtain a degree in medicine as a doctor. It was reasoned that with this credential she would be more readily listened to. In 1957, she became a physician graduating from St. Thomas’ Medical School in London. She broadened her knowledge in pharmacology so that she could better understand how to alleviate pain in terminally ill patients. With this knew knowledge, she became a powerful advocate for the regular administration of pain medications to such patients rather than supplying them on demand.

In 1958, shortly after she qualified, she wrote an article concerning a new approach to the end of life. In it she stated that, "It appears that many patients feel deserted by their doctors at the end. Ideally the doctor should remain the centre of a team who work together to relieve where they cannot heal, to keep the patient’s own struggle within his compass and to bring hope and consolation to the end."

During this time, Saunders began to formulate her vision for a facility devoted to the care of terminally-ill patents. She envisioned a facility that would provide emotional and spiritual support in addition to the traditional focus on medicine. She also appreciated the value of providing a comforting and homelike environment to those at the end of life. Saunders also kept in mind the need to offer support to the families of patients as well, recognizing the stressful aspects of end-of-life issues.

By 1959, she had drawn up a detailed proposal for the hospice she had in mind. After an intense period of negotiation, construction began in 1965 – it was to be called St. Christopher’s Hospice located in South London. It was opened in 1967. It has since become a prime model for hospice care to this date, that is emulated throughout the world.

Saunders spent her final days at St. Christopher’s along with her husband, Marian Bohusz-Szyszko. He passed away in 1995 and she continued working until the end of her life in 2005.

The extent of the contribution Saunder’s has made to the caring of the terminally ill might best be expressed in her own words taken as an excerpt from her acceptance address of the Templeton Prize given on May 12, 1981.

“For over 1,000 years hospice was a resting place for pilgrims, giving them a welcome that lasted till they were ready to go on. For a few, the sick and wounded, it would have been the last stage. For the past 100 years or so hospice has also meant a foundation, still religious, admitting those with incurable illness when the hospitals would no longer care for them. Founded on both sides of the Atlantic and in Australia around the turn of the century, they were for patients dying of cancer and of tuberculosis and with long term illness when the only alternatives were the Poor Law and similar Institutions. Among this group it was the Irish Sisters of Charity who chose the name Hospice, first in Dublin, later in Hackney and applied it especially to those who were dying.

“Over the past decade the word has been filled up with new meanings and has come to stand for a world-wide movement identified by attitudes and expertise rather than by bricks and mortar, for many hospice teams have no beds of their own. I would define the modern hospice as a skilled community working to improve the quality of life remaining for patients and their families struggling with mortal and long-term illness. Some also include the frail elderly. Hospice is about a special kind of living and in a sense is still concerned with travelling: patients, families, elderly residents and the staff and volunteers who meet them, find they are drawn into a journey of the spirit.

“However, this new development began with a building when you, Ma’am, opened St. Christopher’s in July 1967, when we took the word Hospice from St. Joseph’s, generous in this as in everything else. Not the first hospice, but the first planned not only to care for a mixed group of patients but also to develop research and teaching.”

It is for these reasons that the name and person of Dame Cicely Saunders has become synonymous with what is regarded as modern hospice care. Without her clear and compassionate vision, the pain and suffering endured by the terminally ill would not have been so effectively curtailed.
Posted by Joseph Aprile at Wednesday, March 30, 2022