Nadia Murad Basee Taha (Murad), was born in 1993 in the village of Kocho in Sinjar, Iraq.  Her family members are part of the Yazidi ethno-religious minority.  Their livelihood was faming.  The Yazidis have come into focus and captured the world’s attention on account of the fact that the Islamic State of Iraq and Syria (ISIS) has made repeated attempts to annihilate them.  It has been estimated that there are some 700,000 members of this community living in the countries of Iraq, Armenia and Georgia and other parts of the world.  Taha has become an international voice of conscience in regards to her peoples’ plight.  The vast majority of the Yazidis reside in northern Iraq around Mt. Sinjar 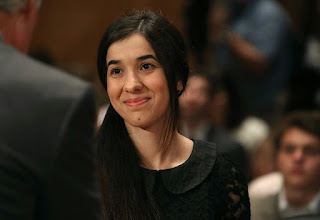 Who are the Yazidis?
As mentioned earlier, estimates put the global number of Yazidis at around 700,000 people, with the vast majority of them concentrated in northern Iraq, in and around Sinjar.  The following description is taken from a report that appeared in The Guardian in August of 2014 authored by Raya Jalabi.

“A historically misunderstood group, the Yazidis are predominantly ethnically Kurdish, and have kept alive their syncretic religion for centuries, despite many years of oppression and threatened extermination.

“The ancient religion is rumoured to have been founded by an 11th century Ummayyad sheikh and is derived from Zoroastrianism (an ancient Persian faith founded by the philosopher Zoroaster (~630 – 550 BC), Christianity and Islam. The religion has taken elements from each, ranging from baptism (Christianity) to circumcision (Islam) to reverence of fire as a manifestation from God (derived from Zoroastrianism) and yet remains distinctly non-Abrahamic.   This derivative quality has often led the Yazidis to be referred to as a sect.

“At the core of the Yazidis’ marginalization is their worship of a fallen angel, Melek Tawwus, or Peacock Angel, one of the seven angels that take primacy in their beliefs. Unlike the fall from grace of Satan, in the Judeo-Christian tradition, Melek Tawwus was forgiven and returned to heaven by God. The importance of Melek Tawwus to the Yazidis has given them an undeserved reputation for being devil-worshippers – a notoriety that, in the climate of extremism gripping Iraq, has turned life-threatening.

“Under Ottoman rule in the 18th and 19th centuries alone, the Yazidis were subject to 72 genocidal massacres. More recently in 2007, hundreds of Yazidis were killed as a spate of car bombs ripped through their stronghold in northern Iraq. With numbers of dead as close to 800, according to the Iraqi Red Crescent, this was one of the single deadliest events to take place during the American-led invasion.

The Yazidis had been denounced as infidels by Al-Qaida in Iraq, a predecessor of Isis, which sanctioned their indiscriminate killing.”

ISIS fighters invaded the village of Kocho where Murad was a student.  She was nineteen years old at the time when she witnessed the massacre that followed resulting in the death of 600 inhabitants including six of Murad’s brothers and step-brothers.  The younger women were forced into slavery.  She was one of 6,700 women taken prisoner by ISIS.  As a prisoner she was beaten, tortured and raped when she made a failed attempt to escape her captors.
Murad ultimately did escape when her captor unwittingly left the door unlocked in the house where she was imprisoned.  She was eventually smuggled out of ISIS-controlled territory and was safely transported to a refugee camp in the neighboring town of Duhok.  In February of 2015, she gave her first testimony of her horrific ordeal to reporters.  Murad moved to Germany, taking advantage of a refugee program sponsored by the German Government.